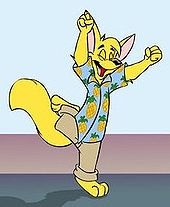 Goldenrod is a relatively new artist to the fandom, only having taken up drawing in 2004.

He is, however, not new to the fandom and has been active on MUCKs like FurryMUCK and FurToonia since 1997.

Currently living with fellow artist Cameroo, he credits a lot of his artistic improvement to his exposure to other furry artists.

His fursona is a bright yellow fox. His style is often characterized as early 1940's-esque, and often related to Cats Don't Dance.

He cites Shelley Pleger as one of his biggest artistic influences.