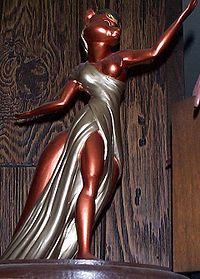 The Golden Sydney Award was an attempt prior to the Ursa Major Awards to create a furry fandom equivalent to science fiction fandom's Hugo Award. It was awarded to a person in "mainstream" media or publishing who had helped to create a more "furry friendly" atmosphere for anthropomorphic material and fandom. This award was given at the furry convention called ConFurence.

The statuette for the award was a sculpture of ConFurence's mascot character Sydney Fisher, sculpted by Ruben Avila.

The first Golden Sydney was awarded in 1996 to Jymn Magon at ConFurence 7 in Irvine, California. When presented with the award, his first words were: "And she's naked!". He is responsible for the creation of the Disney television series TaleSpin and assisted in the making of A Goofy Movie. Winners of this award are focused on anyone in animation and television. [1]