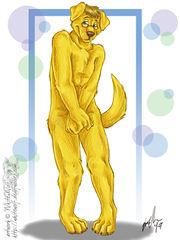 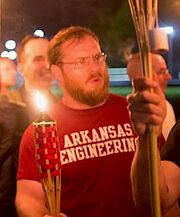 Golden grew up in South Carolina, USA. He graduated from Clemson University in 2007. with a degree in electrical engineering.

He eventually moved to Arkansas and was in a relationship with White Wolf. The relationship ended for various reasons including his drug usage and run-ins with police.[citation needed] Later on, Golden lived in Stratham, New Hampshire.[1]

Golden attended furry conventions, had furry art drawn for him, had worn a fursuit, and some of his best friends were furs.

Golden's fursona was a Golden Retriever. He adapted this form from a deceased childhood pet, whose collar he wore when he went to furry conventions.

On August 2017, Andrew Dodson was outed as a White Nationalist,[2] after he was doxxed for his documented participation at the Unite the Right Rally in Charlottesville, Virginia.