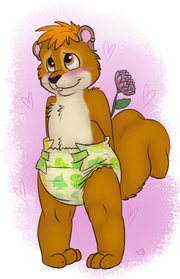 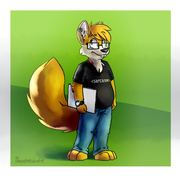 GitCub is a programmer with many projects aimed at the furry community such as Exodus Helper and KeyAffinity (no longer in development).

KeyAffinity was a browser extension for Chrome and Firefox that added functionality to Fur Affinity. It started out as a Greasemonkey script called "Fur Affinity Keyboard Shortcuts" on UserScripts.org and eventually grew in the number of keyboard shortcuts available. These shortcuts included:

A few other features were planned, but GitCub eventually abandoned the project due to lack of FA improvements and many bugs. The extension can still be downloaded on the Chrome Web Store as well as the Firefox Add-on Gallery, but there is no longer guaranteed support nor plans to update. The source code has also been published on GitHub.

FAStyle was another browser extension developed with help from GitCub. This was a project started by CopperBadger and was featured on Fur Affinity's Twitter account. It created a completely revamped design of Fur Affinity, bringing it up to modern standards. As Fur Affinity underwent changes and released a Beta version of their new UI, development of FA Style eventually slowed and was ultimately suspended in June 2015. FA Style's future is currently unknown, as it depends a lot upon the future development of Fur Affinity.

Exodus Helper is a website created by GitCub that allows users to automatically search their user watchlist for users on Weasyl, SoFurry, Inkbunny, and DeviantArt. It was created in response to the IMVU buyout of Fur Affinity. Once a user of the site inserts their username and selects which networks to search, the site runs through their Fur Affinity watch list and searches for users under the same name on the sites they selected. Users who may have multiple usernames across these sites can also submit a Username Matchup, which will map FA Usernames to their usernames anywhere else. As with other fandom projects created by GitCub, the source code is available on GitHub.