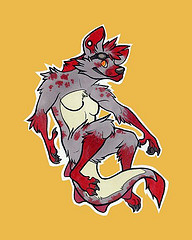 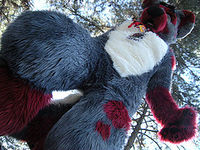 Gina is a biology major at the University of Utah and when not working or studying she enjoys hiking, dancing sketching, reading, and spending time with friends.

She has had type 1 diabetes since the age of five, and participates in fundraising events for the Juvenile Diabetes Research Foundation.

As a gamer, some of her favorite games include RPGs like the Mana and Final Fantasy series, as well as survival horror games (Resident Evil series, Silent Hill series, Fatal Frame series, Clock Tower series, etc.) and her obsession being the Fallout games. She is also a regular on Second Life.

Being a longtime fan of post apocalyptic stories, games, and films as well as a dedicated cosplayer, she has cosplayed various video game and anime characters at Anime Banzai over the years.

Gina is a member of both the UFF and the Utah Furries. She regularly attends meets for both groups.

Gina's fursona is a spotted hyena hybrid (i.e. yeenersaurus), the other component being an unknown spinosaurid. She is often depicted in her anthro form, a bipedal hyena with grey fur and red markings, a cream-colored belly and a large dinosaur tail and dorsal spine. She has gauged ears, a red mohawk, and has a rip in her right ear received in what she claims was a street fight over a Pokémon card. She is often seen wearing a pair of safety goggles, and a white lab coat due to her medical background.

Her markings are a combination of the spots and dark muzzle and limbs seen on a spotted hyena and what are thought of as the marks that might be found on a theropod dinosaur-she has evenly distanced horizontal red bars running from her neck to the tip of her tail reminiscent of the saddle markings on a ball python.

Her other forms include a feral form as well as a dinosaur form.

Her personality would best be described as manic with periods of alternating shyness, the mania seeming to be a flagstone of the hyena personality. She is analytical, sometimes quiet, and appears to view people as less of an enjoyable thing to interact with and more as a snack.

Gina's fursuit is a grey hyenasaurus with red spots, stripes, mohawk and muzzle. The partial suit was completed by Shengoh in March 2011 and made her debut at Rocky Mountain Fur Con 2011, with the addition of a bodysuit by Razzy Lee in September 2011. The bodysuit has digitigrade legs, cast resin claws, and sports an impressive dinosaur tail.

A more realistic hyena head (complete with moving jaw, LED eyes, and wefted mohawk) was built by UK furry Faruku and completed April 2012. An updated bodysuit, complete with spinosaurus sail and theropod feetpaws, was made by Eddie-ka in December 2014.