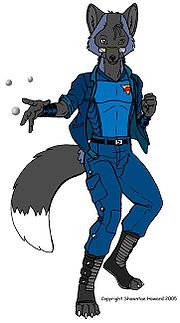 His outfit is set with metal bearings that would allow him lift from his own powers. His wrist gauntlets contain 3 little ball bearings each that can be magnetized and used as weapons. Personality wise, he's the shy, silent, academic type. A 1 year graduate of the academy over Red (who was a senior).

Shawntae claims Gin Jikitsune was inspired by a drawing he had one night. Before he falls asleep, the first ten minutes in bed, Shawntae would run scenarios for his comic stories in his head, viewing the action like a cartoon in his mind. Often it can be free form (that means he's not mentally directing the action, it just happens) and that night, this fox with a totally black face was a member of the The Solar Foxes. The following morning, while doing research on grey fox fur patterns, Shawntae came across a photo of a black fox. After doing some googling, Shawntae found out that that type of fox was a silverfox. So he did a quick design. The glasses were inspired by the character Jin from Samurai Champloo, and Shawntae figured out a power for him, one he hadn't used yet, magnetism.