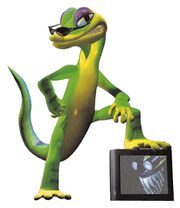 Gex is a video game for the Nintendo 64, PlayStation, Sega Saturn, PC, and 3DO systems, starring a gecko named Gex.

The game's trademarked character is known for his creative quotes, many of which reference celebrities or his passion for television (which is a major element of the game, as Gex enters each level through a large television screens).

He is pulled into his own TV by an evil monster (he is kind of insect-like, yet lacks legs) who goes by the name of Rez. Gex must fight through a series of channels on his TV to get to Rez and ultimately defeat him in order to escape his TV and return to normal life.