Gerald Shepardson is a German Shepherd character in Extinctioners. 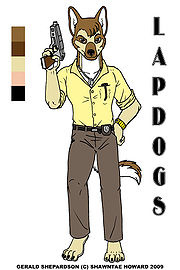 If there's a rule that has to be followed, you can pretty much expect Gerald to try and find a way to bend it. Brash, rash, and often headstrong Gerald performs his job as he lives his life, at full speed. Sometimes this can make things very lively and fun, but other times it can get him and others into trouble. Fortunately, he has Damion Pincer as a partner to keep him centered.

Gerald made it through the academy with the most write ups of any recruit ever for rule violations, but darn if it didn't drive his instructors crazy when he'd still somehow manage to pass every test, challenge, or case put in front of him. During his school years Gerald's wild living ways ended up seeing him became a father, though he no longer gets along very well with his former girlfriend, and they have a visitation agreement for him to see his little girl. Being a dad, has made him a little more responsible, but really only a little, he's still a pup at heart, with a very wondering eye.

It was his rash decision making during the arrest of Lynx Wylde (not waiting for the warrant to clear) that caused the evidence they collected against him to be thrown out in court, and thus created the situation where Wylde managed to make bail, which allowed him to make an attempt on the life of Cassie Collins. IT was pure luck an that he wasn't killed during the situation and it showed him that maybe he should start to grow up some and take life and the people he knows in it, a little more serious.