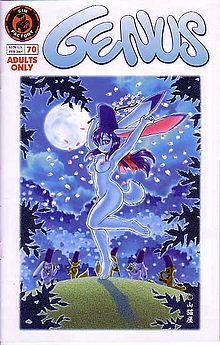 Genus began in June 1993 as a mature-readers comic book anthology series from Antarctic Press, as a kind of edgier companion to Furrlough. But fans and contributors demanded a bit more, and the title very quickly switched to adults-only with the next issue. Issue #2 is the rarest and most-expensive-to-buy issue, because the second issue saw a major dip in sales following a strong debut (most new comics series see a 25-50% drop in sales between the first and second issues), but it also featured the debut of Terry Moore, with a full-color comic-style ad on the back cover with furry versions of the Strangers in Paradise characters. On issue #5 the imprint was switched to Venus Comics. Over the next couple of years, Genus continued to gain a steady audience and growing sales trend.

In 1997, Antarctic Press decided to discontinue publishing Furrlough and Genus, and the final issue under Antarctic Press was issue #22. Radio Comix picked up the series right away, and has continued to publish Genus bi-monthly ever since. The comic book is currently published under their adults-only imprint, Sin Factory, with over seventy issues published to date (2005). Over the past dozen years, Genus has published dozens upon dozens of furry artists and stories, including work by: Eric W. Schwartz, Terrie Smith, Karno, DAQ, Jerry Collins, various Japanese artists, Tygger Graf, James Hardiman, Mitch Beiro, Roz Gibson, Joe Rosales, Paul Kidd, DLNorton and many others.