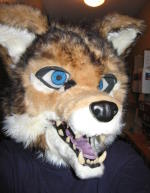 Coyoty, also known as Coyoty Wright and Coyoty Dave (previously known as Centaur, Gentaur, and SF-CENTAUR; real name Dave Wright, born March 1, 1961), is a furry artist and fursuiter who lives in Hartford, Connecticut, USA, and works as a IT specialist.

Coyoty collects comic bookss, reads and watches a lot of science fiction and fantasy, and hangs out with furries. He writes quite a bit online but never gets around to publishing anything professionally. He drives a bronze Subaru Forester with the license plate COYOTY.

He has appeared in the music video Higher Than the Stars by the indie pop band The Pains of Being Pure at Heart.

Coyoty was the administrator of Bestiaria (discontinued), a furry/anthropomorphic/mythological/improbable beastie resource website, maintained with the help of Wulfraed. As SF-CENTAUR, Coyoty was a moderator in the Science Fiction RoundTable on the now-defunct online service GEnie, and a member of the Beastie Board, which originated there before becoming part of the Comics RoundTable.

On FurryMUCK, Coyoty has a superpower: Whenever someone hugs him, he transforms to a coyote-ish version of the hugger's species.

He orchestrates the First Friday Furmeets at the Town Line Diner in Rocky Hill, Connecticut.

Coyoty's fursona is a coyote.

His suits are a full suit made by SPark, and a zombie canine partial from Zrcalo (Coyoty 1 in the photo has been retired). His current head is a realistic coyote by Inerri Creatures. He appears in costume at conventions (FurFright and Anthrocon), plus volunteer events as a member of Hi-4! Entertainment.