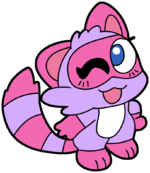 Lucky, as drawn by herself

Genesis has wide ranged of fursonas depending on what she decided. Currently, her OC is a cat named "Domino". Formerly, she played several other characters, such as purple creature named Artemis, an Eevee named Keromi, a pink and purple raccoon/tanuki hybrid named Lucky, a tanuki/rabbit hybrid, named Crystal, a red panda named Yurobi, a pixie, a cat-like fairy named Cybelle Fuwaya (later known as Twinkle Belle), a dragon named Crystal Tatsuya (later known as Alliya Tatsuya), and a white chinchilla named Nova (who was originally a winged, fairy extraterrestrial).

In the past, in the battle Genesis uses her attacks by throwing false teeth caused by spinach, and a bologna sausage, preferring melee combat to long-range She normally had magical powers, which she uses to make victims inflate or vomit. However, she quits doing that to avoid being bullied. The cat character is rarely drawn in an alternative form which sports white armor (actually a white battle suit from Bomberman B-Daman Bakugaiden), and shoes.

Her other characters are Kris The Mew (her Pokémon fan character), Omiya-Chan (a cat), and Matia the Rabbit (her old rabbit fursona who later became her Sonic OC).

Genesis is primarily known for her cute, clean artwork, although since 2018 she has drawn draw |mature and even adult art. Her images generally feature either furry characters, or characters of mammalian nature, possibly inspired by Pokémon and/or Kirby characters. Currently, her art style is inspired by a mix of 80's and 90's children's anime, gag anime and certain indie games like Friday Night Funkin.

In 2015, she was accused on DeviantArt by some users[who?] of being a pedophile[citation needed] because she drew some images of fictional children either pregnant or inflated, and in 2020[citation needed] for defending a user named NuggetTheBalloonGirl, who is also known for drawing inflated children.

On June 2, 2021, Genesis (under the name of "Supernova-Skymancer") wrote a Fur Affinity journal about claiming to be a pedophile. As a result, all of her Fur Affinity accounts were permanently banned (although they all deleted later). She wrote this "confession" in order to stop people[who?] from Kiwi Farms from archiving any of her sites online due to her mental issues.[clarify]