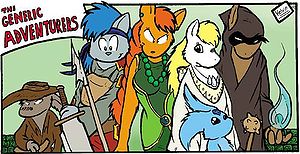 The Generic Adventurers is a one-shot seven-page comic created by Chris Farrington as a project in his senior year of art college. The comic featured a set of generic adventurers, on a suitably cliched quest. Some themes of the comic were lifted directly from Final Fantasy, most notably the battle system (These things will be no match for the three of us!). It was included as an interlude between parts of Kitty Omega.

Did you know? Waffle Fox can be seen in the background of page 2