From WikiFur, the furry encyclopedia.
(Redirected from Geico Gecko)
Jump to: navigation, search 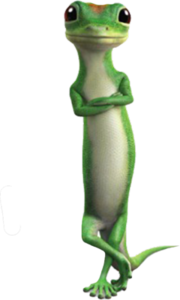 GEICO Gecko is an anthropomorphic gecko used in GEICO commercials.

The company's ads usually focus on its reptilian mascot, the GEICO gecko, which is a talking Day Gecko created by The Martin Agency and most recently a CGI creature generated by Animation Director David Hulin. The gecko first appeared in 1999 during the Screen Actors Guild strike that prevented the use of live actors.[1] In the original commercial, where the gecko pleads for people to stop calling him in error, mistaking gecko for geico, he was voiced by Kelsey Grammer. In the subsequent commercials, the gecko speaks with an Australian Australia British accent[citation needed], because it would be unexpected, according to Martin Agency's Steve Bassett. As of 2007, Jake Wood, an English actor and comedian was the voice of the GEICO gecko. In current commercials the gecko's accent is more working-class Cockney (a typical London accent), perhaps in an effort to further "humanize" him.[2] "As computer animation got better and as we got to know the character better, we did a few things," says Steve Bassett, creative director at The Martin Agency. "We wanted to make him a little more guy-next-door. And he looks a lot more real than he's looked before."[1]