Gdakon is an annual convention in Gdańsk. Initially organized to fill a gap in the event schedule during the winter period, it is one of the largest conventions in Poland. Gdakon attempts to follow the examples of foreign furry conventions, while adapting them to Polish settings.

Initially it was not a typical convention, but merely a furmeet, but with time and growing popularity more and more guests started to come, including the growing percentage of foreign guests. Because of that, the organizational capacities of Bursztynek hostel were exceeded and the organizers decided to move the con to the Amber hotel.

Before "Gdakon" became a convention, it was a series of furmeets organized in Gdańsk mainly by Raksha. As time passed, it was decided that the meetings could be organized in the form of a convention and the next edition took place in the Bursztynek hostel.

Previous editions of the convention[edit] 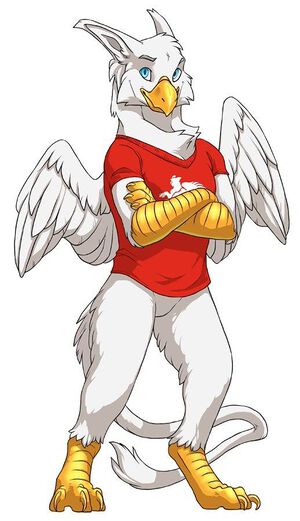 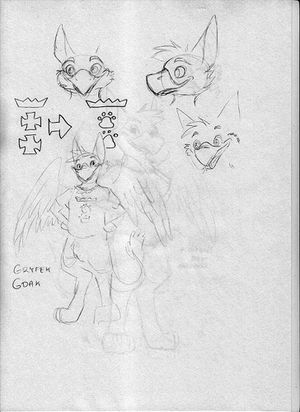 A sketch of the Gdakon mascot made by Agent

The name Gdakon is a portmanteau of Gdańsk and the word "convention"[1], which initially was meant with mixed enthusiasm, which was related to the onomatopoeic sound of "gdakanie" (the Polish word for hen’s cackle). It was instantly caught by the artists, who created the first unofficial mascot – a chicken. With time the organizers decided that it is distinct and good enough to become an official mascot, taking a form of a gryphon.

Before the mascot (called now "Gdakonek") became official it looked like Chocobo, appearing sometimes as a joke element of the website, e.g. as a replacement avatar for the site users.

A joke varation on the logo. Author: Fuckie 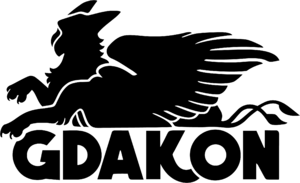 A fixed version of logo used across all editions. Author: Fuckie

Due to the unwillingness to set a single, fixed logo for all convents, it was decided that it will be connected to each year’s main theme. Thanks to this Gdakon has no fixed logo, and its different variations will be introduced each year. Although in 2017 a need for a fixed logo has led to creation of one.

After the 2020 edition it was decided that the role of the chairman will be flipped each year between Lemurr and Fuckie (with the exception of 2021 which had to be cancelled due to Covid).