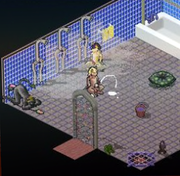 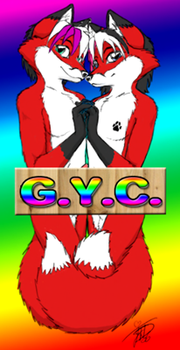 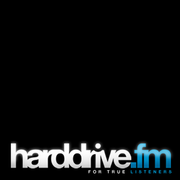 The Gay Yiffy Club, also commonly known as GYC or [GYC], is a social club located on Second Life that caters to gay, straight, bisexual and transgender furries. Being a mature establishment, it allows public yiffing on its premises.

The Gay Yiffy Club was first built by Senjin the dragon, a Dutch fur, on the RPG Furcadia in 2001. Its name also stems from this era, as the dream's title had to describe it. It was the first, and at its time, the only dream where the Furcadia avatars were naked. After some drama caused by members and staff of a neighboring dream, plus the demise of the dream's server, the club was dismantled and never rebuilt on Furcadia again.

Later in 2005, GYC would be rebuilt by Senjin (Senjin Soothsayer) on Second Life in the mainland region Donders. In 2006, while being run by fellow dutch fur Kiroja (SL name: Kiroja Fluffy), GYC moved to the private sim Silverstone in the Silverdreams cluster owned by Angel Fluffy.

On December 13, 2008, the club moved to a new private sim owned by the club itself called Rinji, then on August 2010, the GYC management acquired a new sim next to Rinji called Jia for the commercial buildings to be moved there and to reduce overall lag.

Although the name suggests the club only caters to gay furry males, the club is very open and welcoming to any gender, species, and/or orientation.

The club features a dance floor, pool, bar, and lounge area, as well as four private rooms, which can be freely used by anyone who wants a little privacy. The club also has a shopping center, where anyone can rent vendor spaces. After the Raised Tail Inn was demolished, GYC started its own escort service.

GYC has a staff of over 150 furs in various capacities (dancers, DJs, escorts, security, event staff, and a fortune-teller[who?]): Management positions:

GYC made the furry presence on Second Life known again at Second Pride 2009, in a joint venture with The Yiff Factory.

From September 2, 2009, the UK Radioshow HardDrive.fm found it's new home at GYC. Harddrive.fm aired its weekly 4-hour radio show every Thursday live from GYC. Unfortunately, they have not returned since the 2010 season.