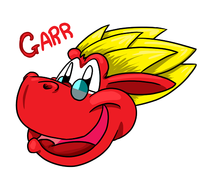 A World of Legendary Beasts, Drawn and Colored by Gaiden

Dragon Island (ドラゴンの島) is a fictional overworld in the story of Garr Redstar. This area is presumed to be a continent or a large island, rather then just a regular one.

The population of this island are only male and it consists of various dragons and micro dragons, each having different colors, sizes and magical skills, although there are a number of humans living there as well.

There are several main zones in this region that can venture in, you start in the Central Field Zone and move to anywhere you wish.

This area is mostly covered in trees and fruits, after exiting South Forest, on the right side of the 1st fork in the road, you'll find this zone, this area leads to the Earth Shrine, and after leaving this are you'll head to the Great River, the Earth Shrine is the First Shrine to Visit.

This area is the first zone that will lead to ether, North Forest or Mountain Trail, here, there are many enemies to encounter, there are also many traps to avoid to reach the 1st fork in the road.

If you wish to record your adventure or just looking for the next job on the list, go to the house that is painted red for help, Mr. Keiichi is happy to help in whatever is needed to be done.

A giant stream disconnecting the Forest Route to Micro Town Path, the current is usually strong, so it's better to fly across, swimming will push you downward into Cascade Fall, if anyone tries this will make their traveler start from North Forest all over again, the drip will not harm the one who fall within the Waterfall.

This area cleans the water that the Great Falls Drops into it, here many creatures use the left side of the area to drink, wail the right side is used to Bath in.

A ghost town that was left to decay, of the many seasons and ages it was left with many broken objects and destroyed homes, this area holds the Wind Shrine as well as the elemental force of Air, this is the 3rd Shrine to be visited.

This is where most people would rest and relax, here, people can sunbath, picnic, fish, swim and do other things to make a good day better.

a giant ocean that is clear and blue as the sky itself, Cascade Ocean holds Dragon Island in the center of the planet and hides the Water Shrine deep within.

After moving from there original prehistoric town, the people begin to rebuild a new city which is highly made with the best materials there ever was, the president of Lappy Inc. is also the mayor of the city.

A danger to everyone who swim in its waters, this area has enemies who are just as strong in the Forest Zone but even stronger in water, this area is also known for having strong whirlpools.

Shrine of the Six Dragons[edit]

The Six Dragons of Time are placed here to be a reminder of the vast happiness one can have when teams can work together, there are Mayan-like pyramids and there are 2 in each one, pyramid 1) Red and Orange Dragon, Pyramid 2) Yellow and Green and Pyramid 3) Blue and Pirple, to get the ancient skill, they adventurer must Clean all four shrines.

This area holds all the history of the island and tells the story of Garr's past, Roku is the manager of this place. You don't need to complete this stage to finish anything, but to get the golden sword, you must finish half of his tasks, to get the platinum blade you have to finish all of his tasks, Roko has 10 tasks for you o do, the first five is rather easy but the second can be quite hard to finish.

The Water Shrine isn't seen on the map, but in the south east region, this area lies under the Cascade Sea, technology covers this area and despite its unusual place in the world, it can be entered by using a sewer path in New Micro City. This is the last Shrine to be visited and Cleaned

The place where Garr stays and where the 2nd Dungeon is found, the fire Shrine keeps the cold-blooded worm and safe wail also being doubled as an armory for making, swords, shield and other iron objects, after leaving South Forest, you will encounter another set of enemies which is harder to destroy. They are equipped with armor and other things that you would have, Garr's House is the Tallest Mountain Summit.