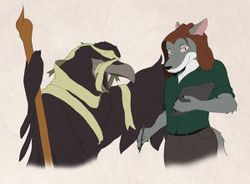 Garr is a British furry artist originally from Kent. He currently lives in England with his wife Cassandra Rising and many quadrupeds. He enjoys martial arts and philosophy, and will never turn down an offer of coffee, wine, or whiskey.

His character is a dapper grey wolf with white markings and shoulder-length brown hair. He also has an alternate character whose name roughly translates as 'Raf. 'Raf is an non-morphic blind bandaged raven who walks with a wooden staff.

In 2004, Garr sent in an audio letter and subsequently earned a spot on the show 2 Sense. His segments had several formats as "2 sense" evolved:

He also recorded a reading of the popular poem The Raven as a segment, but it proved too long to include on the show. Following the end of the "2 Sense" show, Garr co-hosted the short-lived radio show VLF on the FBC with fellow British fur Sphelx.

He has also lent his talent to several other voice acting projects, including the role of Soshi in the second episode of the Kaze: Ghost Warrior series created by Timothy Albee, and the lead role in the audio adaptation of Surreal.

Garr is also an artist with two distinct styles. His original drawing style is inspired by tribal designs and Japanese line work and has been tattooed [1] on several members of the fandom.

His second style is more cartoony and filled with strange humour and obscure references. He has a particular affinity for drawing wolves, bats, and ravens. His art can be found on Fur Affinity.