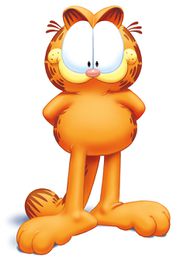 Garfield debuted in a daily comic strip on June 19, 1978, and since then, has starred in his own animated television series called Garfield and Friends from 1988 to 1995, and The Garfield Show since 2009, a few animated holiday specials, and has two feature-length 3D animated/live-action movies (the most recent which was released June 2006.)

Along with Odie, his unlucky-at-love owner Jon Arbuckle, and an assorted cast of minor characters, Garfield uses his wry sense of humor and eternal slothfulness to create humorous, kid-friendly comic situations. Usually, his antics end up keeping John unlucky in love, and Odie, depicted as a silent, dense dog, getting into all sorts of mishaps.