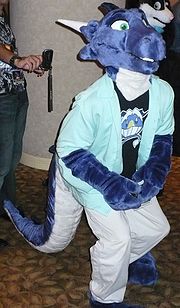 Ganador is a furry artist and fursuiter who lives in New York City, New York, United States. His fursona is a male blue and custard dragon.

Ganador owns and runs Peach Fuzz studio on Second Life, under the name Flashdust Lamington. He is dating Spunky.

Ganador left Fur Affinity after an accusation of art theft which was resolve, but kept getting re-opened (and admin misbehavior). "I am leaving FA because, … the AUP does not function."[1] {AUP = FA's Acceptable Upload Policy}

Around 2012 April, Demicoeur accused Ganador and one of Ganador's customers of art theft and then that customer was harrassed by multiple people.[2] Fur Affinity admin Sciggles resolved the issue, but a month later on 2012 May 26 Ganador was contact by an FA admin (Qoph) about the same artwork that there was a "report that this character design was taken from another artist's work". Ganador told Qoph to contact Sciggles and Qoph replied on 2012 June 5 with the curt "Decided that we aren't going to pursue this any further." A month later Qoph contact Ganador again and claimed "After further consideration by the admin team, it was decided that the character designs" were too similar and that "Hundred of other blue jay characters were looked over, and none of them had markings similar to those that these two characters share". Sciggles replied that Demicoeur "is not the first OR last to put striped markings on a blue jay character hybrid and Qoph did a poor job looking …". Ganador says both Sciggles and Dragoneer informed him that the "case of the blue jay" was closed.[1]

Over a month later, Qoph contacted Ganador about a guilmon artwork (reported by someone who may have thought it was a re-color of another artist's work). Ganador then contacted Dragoneer and Sciggles saying he would send Qoph a "simple explanation" but that Ganador feared Qoph "is not interested in sense and logic, …". Dragoneer said he would speak to Qoph, and Ganador was then given confirmation not to take any action because the guilmon submission was fine. Qoph was silent until, 3 weeks later on 2012 August 17, Qoph re-contacted Ganador with a "final reminder" about the guilmon artwork. Ganador replied "… Dragoneer told me that he would be talking to you, as he did on prior issues on which you were acting outside the TOS. …" Qoph went back into silent mode.[1]

On 2012 December 1st, yet another FA admin (Bazeel) contacted Ganador about the same blue jay art. While communicating with Bazeel, Ganador also contacted Dragoneer and found out Quoph pursued the redundant trouble ticket because "Demicoeur was still pushing the issue".[3]