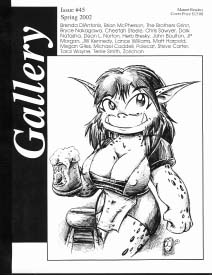 Gallery #45, cover by The Brothers Grinn

Gallery was a publication for cartoonists and illustrators, a significant proportion of which had contents that were anthropomorphic or funny animal in nature, which ran quarterly from the fall of 1989 to the winter of 2004 (issues #0 through #50). It was described by its creator Richard Chandler as "a cross between an APA and a fanzine."

When Richard Chandler was first getting started in furry fandom, he became aware of two APAs, Rowrbrazzle and its predecessor, Vootie. He discovered that although he heard about them, he was not able to locate any copies to view because they were only available to members; Vootie had ceased publication before Rowrbrazzle began, and the waiting list to join the latter was estimated to be three years long at the time he inquired. While he hadn't seen either APA, he had seen copies of some of the artwork inside them and was very impressed.

Lacking drawing skills and not wanting to wait to join, Richard Chandler decided to start his own fanzine in the fall of 1989. Feeling shut out from the other publications, he decided to make it open to subscribers, and created the first APA that paid royalties. Since he was not well known, he arranged the finances as a non-profit, figuring that would make him look more trustworthy (this was very important to him, and he made other efforts to uphold it as his standard).

Matt High, of the comic book company Antarctic Press is credited by Richard Chandler as the person who coined the term "APA/'zine" to describe a publication like Gallery.

When he discontinued publication, Richard Chandler stated he was having trouble finding fresh talent and people willing to buy new issues, and felt these were due in part to easy self-publication and the availability of free artwork on the Internet, and his own inability to attend fan conventions to sell them.

Physically, Gallery was 8.5 inches wide and 11 inches tall, and many issues were between 200 and 300 pages with 25-32 artists contributing. It was printed (black and white Xerographically) on 20# bond with 60# cardstock covers, and bound with heavy-duty staples, flattened and covered with black masking tape.

Gallery's rules became a model for other APA/'zines like Huzzah and Yarf!, and helped keep the friendly atmosphere of "give and take" from an APA in a publicly accessible fanzine.

There were three types of members: Member Artists, Contributors, and Subscribers.

Royalties were based entirely on participation rather than page count to make accounting simpler. Even so, the price of each issue still fluctuated because there were often different numbers of Contributors with each issue. To accommodate this, Gallery used an account system, making it possible for Subscribers to pay only for what they were getting. After payments were made into a subscription account, only three things were deducted from it -- the printing cost of each copy sent, royalties for each artist in that issue, and the postage and handling.

The cover price was computed at cost plus double the artist royalty and rounded up to the nearest dollar (50¢ for earlier issues). Thus for copies sold at conventions, artists received a double royalty. But the vast majority of copies sold at cover price were sold by various mail order services that carried 'zines, which paid a wholesale price which was the same as the subscriber's price.

Anyone who was able to demonstrate the talent to express themselves artistically was welcome to try out for admission as a Member Artist, whether professional or amateur. Although many of the artists were furry fans, there was never a requirement for anthropomorphic or funny animal art, nor even a theme or other restrictions on creativity (subscribers were required to sign an age statement).

Like in an APA, Member Artists were invited based upon the art sent in for review. Richard Chandler stated he looked for things like anatomy, varying line weight, balance, shadows, textures, backgrounds. He also preferred character interaction and pictures that seemed to tell a story, especially comic strips, and considered a good sense of humor to be a plus.

Although content was entirely the responsibility of the Contributors (including the political, sexual, or religious nature of any artwork), he had final choice on whether something would not be used, and warned against personal attacks, and copyright and trademark violations. Another prohibition was against contributions of which 50% had been previously published, or simultaneously submitted to other publications (exceptions were made for limited, members-only publications such as Rowrbrazzle).