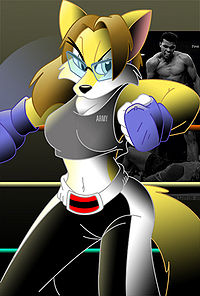 She doesn’t frequent conventions too often but she does plan on starting as soon as her time in the military is done and hopes that she will have developed enough of a name for herself to be able to bring her art to everyone.

Raised in a small wooded area Jessie has always had a love for nature and animals. From the very first time she even heard of the term furry she has felt a sense of belonging, but she was officially introduced into the Furry Fandom in 2006 when a friend of hers introduced her to a few websites and the many ramblings of 2 Gryphon. She attended her first at Anthrocon 2007 and knew this is where she belonged.

She currently serves in the United States Army as an MP in hopes of restarting her life and giving her a future to look forward too. She will say the army has changed her for the better as she is no long as shy as she use to be and is able to stand up for those who can’t do it for themselves.

When not working on furry art, Gadgett has been working with Whitefire Nomura in an attempt to rebuild Vulpes Studios in which Gadgett is now part owner. She attended the Art Institute of Pittsburgh in which she has acquired her Bachelors in Graphic Design in 2005 and is now currently gaining her second Bachelors in Web Design.

Gadgett is one of the many furry artists out there but hopes to one day make a name for herself. She started at the age of 4 and has never put the pencil down since. Her main mediums are pencil and digital art, but she does experiment with others such as paints and airbrushing.

Gadgett is a novice writer and enjoys bringing new worlds to life. She has never published anything and most likely will never publish the Gadgett Online series. If she does finish writing it, it will most likely be published online for anyone to read.

Gadgett Online is a novel being written by its eponymous author. As the story progressed, Gadgett fell more in love with the main character and decided to adopt the name and character as her own.

Book 5 - Book 5 took us into Gadgett’s afterlife in which she is split in half. Her good side to ascend to heaven while her evil side would perish in the fire pits of oblivion. Rather than face such a fate Gadgett’s evil said escape and traveled back in time to destroy everything Gadgett was. Therefore, Gadgett has to go back and stop her, and learns more about her past and what really caused the death of her parents. This book closes with time itself collapsing in on the two of them and them escaping thru the only route available to them, thru Gadgett’s birth

Why, you might ask? Well we find out at the end that Ratchett has actually been trapped between realities and has been destroying all the realities in which Gadgett is victorious. Pulling her from normal reality, Ratchett faces Gadgett in their final battle, ending the series for good.

Gadgett: Shy, sweet and always in over her head, Gadgett just wants to live her life but finds all this weird stuff keeps happening to her. Not being able to speak she communicates through ASL (American Sign Language) and has a special arm that can transform into any tool (or later on any weapon) that she needs. Gadgett never thought of herself as anything important and never fathomed that her destiny would bring her to deciding the fate of all creation.

Diode: Diode was originally created as Gadgett’s partner and potential love interest. Smart, loving, and always protective, Diode always did his best to protect Gadgett from any form of danger they would have faced, despite his best efforts though, Diode would more or less just be flipped to the side. Diode just never seemed to “take off and the little green bird was written out by the 3rd book as he found a new love and moved away.

Jim Graves: A mountain of a bear, Jim started out as a street thug that the mugged Gadgett and Diode, but with the help of his daughter Sam, he changed his ways and now tries to make an honest living. Now working as Gadgett’s delivery man and personal body guard, Jim hold deep feelings for her but never seems to have it in him to express it. This carried all the way until the very end of the 4th book, in which as Gadgett and Jim finally confessed their love.

Samantha “Sam” Graves: Young, Energetic, and smart as hell, Sam is Jim’s daughter and guiding conscious. All Sam has ever wanted was a family to call her own, and has her eye on “Ms. Gadgett” and her father to make this happen. But for now, they lived their lives homeless on the streets, dodging social and begging. Sam was killed by Baa at the end of the first book but she was found on the other side in the forth book where her father and her enjoy a long overdue reunion.

James: The self proclaimed, “Greatest Driver of all time”, James thinks of himself as the ultimate ladies man. In fact there is nothing he is not good at and he’s not shy to let anyone know that either. In fact his delusions of grandeur is so great he still believes Gadgett is only playing “Hard to get” James is another character that just never took off but that is ok because he was added as filler anyways. The only sad fact was that he was the only character to have really died, and not come back, as he met his end at the hands of “Ratchett”, Gadgett’s Evil side.

Baa aka (2Wire): An Egyptian God who was imprisoned for thousands of years, Baa has spent the first 2 books trying to find a way to destroy Gadgett so he may take over her body but spent the 3rd and 4th book trying to be reincarnated through Gadgett’s Unborn child. Baa met his end as Gadgett sacrificed herself, and her baby, to stop Baa from being reborn. Baa did come back however in the 6th and final book, as he joined forces with Ratchett.

Ratchett: When we die, we are split into two parts, a good side which is allowed to ascend and explore the mysteries of life and beyond, and an evil side which is discarded into the abyss. Gadgett’s evil side escaped the eternal punishment and went back in time to destroy all Gadgett was, is, and would one day be. Ratchett met her end when she found out her and Gadgett would be stuck in an eternal stalemate and destroyed herself hoping to take Gadgett and all of time with her.