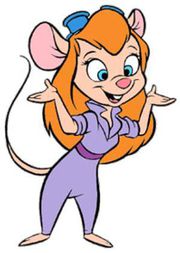 Gadget Hackwrench is a fictional cartoon mouse in the Disney animated television series Chip 'n Dale Rescue Rangers. Gadget was voice-acted by Tress MacNeille, who also portrayed Dot Warner and Babs Bunny, and is a regular guest voice actor on numerous other shows, including Futurama and The Simpsons.

She first met Chip and Dale in the pilot episode, when Monterey Jack was seeking help from her recently deceased father, a famous mouse aviator named Geegaw Hackwrench. Having no other obligations or support, she joined the Rescue Rangers team, and lives with Chip, Dale, Monterey, and Zipper the Fly at their headquarters in a hollow tree in a city park. Both Chip and Dale are attracted to Gadget, and often compete for her attention, though she is portrayed as being blissfully ignorant of these advances.

Gadget's main contribution as a member of the Rescue Rangers is as a mechanic and an inventor; she has the uncanny ability to take discarded and unrelated items and invent nearly anything with them. While her more complicated inventions don't always work exactly as she intends them (resulting in running gags in several episodes about phrases such as "It should..."), her improvised gadgetry does work when it is necessary. Like most eccentric inventors, she can become extremely focused on her work, and therefore oblivious to the world around her. However, Gadget is well aware of her attractive appearance and is at times willing to use it to her advantage when necessary, usually at the request of her friends.

Even for a copyrighted furry character, Gadget has an exceptionally large following of furry fans who often call themselves Gadgetphiles (or are called that by others). In fact, Gadget is so popular that the site TVtropes.org about tropes and archetypes in popular fiction applies a number of tropes to her regarding her popularity among viewers, fans, and furries[1], including Ensemble Darkhorse (because Disney themselves were surprised by her instant popularity), Fetish Fuel, Just Here for Godzilla (because a large percentage were and are fans of the Rescue Rangers series only because of Gadget), Launcher Of A Thousand Ships (expressing the phenomenon that a character is so popular that fans will buy, watch, read etc. whatever includes the character), Ms Fanservice, Nerds Are Sexy, and has even a trope named exclusively after her: Gadgeteer Genius , the advanced form of a Wrench Wench of technically-minded, engineering girls.