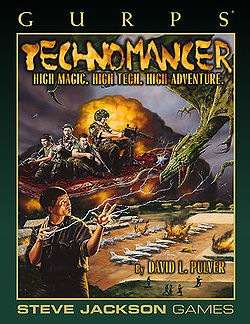 GURPS Technomancer was a supplement for the third-edition GURPS roleplaying game produced by Steve Jackson Games. An update to fourth edition was hinted out in the GURPS core rulebooks, but has not been confirmed by anyone at SJG.

In the game world, during an atomic bomb test, the religious chant made by a horrified researcher to attempt to reconcile with having created such an awesome weapon unknowingly formed the basis of a magical ritual, with the energy of the bomb its fuel.

From the bomb's energy, magical radiation (mana) spread throughout Earth. Many unborn children were changed, and people (soon to be known as mages) discovered they had a special talent for handling this magic. Certain belts (for example around the Nevada testing site and the arctic pole) have a higher mana level, making it easier to cast spells. Magic is now a part of everyday life, with everything from TV repair spells, magical sweatshops, mass-produced magical items and military units using magic carpet air cavalry tactics.

Many of the unborn children became chimeras -- half-human, half-animal hybrids. The 'canon' chimeras are cat, coyote, fox, hawk, snake, and spider; chimeras breed true, and can breed with normal humans (creating 'halflings': half-cat, half-coyote, half-spider, et cetera). Some lizards were mutated into dragons, which have been magically gengineered. Various other templates of interest to many furry fans include vampiric, elemental, and demonic.

And, of course, there's the killer penguins...