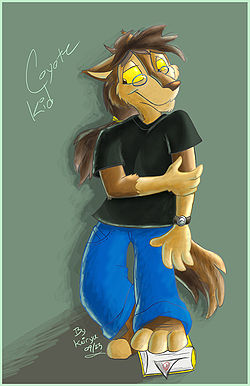 GN Varga, as drawn by Kairyu.

GN Varga (aka Neon Flash Light or JakeII) is the online fursona/pseudonym of Jake Womble. Located in Arlington, Texas, the coyote writes various furry and non-furry stories and has taken a severe interest into roleplaying on the Yiffstar forums, though his recent activity has seemed to decline. Jake is an up-and-coming writer, actor and comedian, planning on working and writing under his original pseudonym, Genericname. According to Jake, the name Genericname is a reference to a Strong Bad Email (from Homestarrunner.com), in which Strong Bad calls one of his fans "generic name". Jake is currently writing a TV pilot.

GN, or Genam Nero Varga, was born in Megalopolis, Arcadia in Greece. His family includes father Ryan Varga, mother Helena Rastapolai Varga, along with his sister, Katherine. Although they normally reside in Phoenix, Arizona, they delivered him in Greece for Helena's family, specifically her father, who wanted to see his grandchildren before passing on. After high school, he moved to Texas to attend college at TCU.

GN was, and still is, rather small by coyote standards. At only 119 lbs and standing at only 5'4", he is very diminitive. He is near-sighted, and wears a pair of thin-framed glasses at all times. Despite his small stature, he isn't completely defenseless. When he was a child, he often practiced Capoeira, the Brazilian dance-like martial art.

He is close friends with Kaylin Kallon.