The GNU Project, which is the creator of the GNU operating system, uses a grinning Gnu's head as its logo and mascot[1]. The logo, which was created by Etienne Suvasa in the 1980s, is regularly used by the both the GNU (or "GNU's Not Unix") Project's developers, by the Free Software Foundation in advertising and advocacy, and by artists who usually use the mascot alongside Tux, the Linux penguin mascot, to signify the longtime combination of the GNU operating system with the Linux kernel in most Linux distributions. 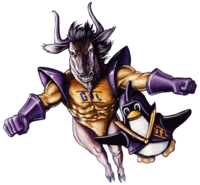 In several cases, the FSF and GNU project have depicted an anthropomorphic gnu in a yellow robe.