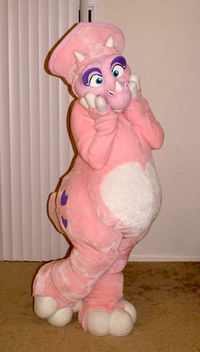 Taffy the Pink Triceratops (previously known as Fuzzyfin) is a fursuiter.

Taffy has assisted in performance panels at Midwest FurFest 2008 and 2009. As a fursuit performer, she has also been in the Ocean City DooDah Parade (2010), performing as Ford Shepherd.

Taffy's fursuit was built in the Fall of 2010 by Media of The Critter Factory. She debuted at Midwest FurFest 2010.

Taffy was inspired by The Land Before Time and the Care Bears. The costume is entirely made of padding as the performer (as of April, 2011) weighs under 130 lbs.