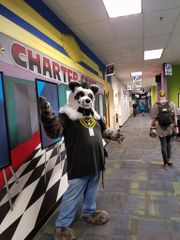 Fuzzy initially was introduced to the fadom due to various 90s comics and graphic novels, such as |Omaha the Cat Dancer, |Jim Hardimancomics, and various 90s cartoons. Officially however, a fursona was not developed until the creation of the Pandarenrace featured in World of Warcraft. While dabbling slightly in other fursonas, Fuzzy mainly stuck with his panda. Due to outside influence, he dropped out of the fandom for about a decade, recently in 2016 returning. 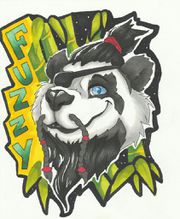 Fuzzy's original fursuit was designed based off his images by Dragonmade Worksbut is currently seeking a reproduction. 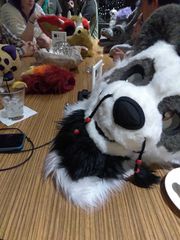