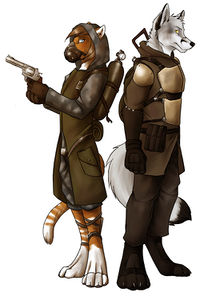 Futerkon 2012, held August 8-11, 2012, was the first edition of Futerkon, a furry convention in Poland. It was held in Training and Recreation Centre Dzierzazna in Dzierzazna town near Zgierz and Lodz cities. The theme was "The end is near..."

The charity was Bernardyn fundation.

For the accommodation, organizes reserved seventeen cottage houses for up to 5 people each. Also, three B & B rooms were prepared.

Within rooms and cottages, convention received for its own use following infrastructure available at the venue:

Attendees had received catering service as per accreditation option selected during registration. 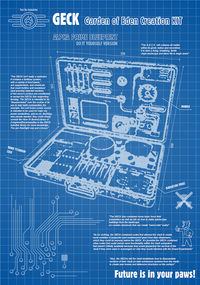 There were to programme breaks provided in the schedule on each day of the convention:

General program was built from three convention days – Wednesday, Thursday and Friday. It started on Wednesday with welcome campfire and a treat for attendees. During the campfire, an open karaoke session was organized near the campfire place. Later on that day computer games competitions was held in glass hall.

On Thursday, attendees were able to take part in shooting workshops (including archery, pneumatic guns, ASG and such). In the afternoon there were open drawing workshops organized for all attendees (led by Blajn). After the dinner break, everyone gathered in glass room to take part in charity auction. 2012 funds have been entrusted to Bernardyn foundation, which is involved in rescuing abandoned animals. Just after the auction, “Furry in pop culture” presentation was presented to attendees by Kot and Pasterz. In the Thursday evening once again all attendees were invited to take part in big programme attraction – dancing party.

For Friday morning sporting activities were scheduled, however, due to lack of attendee’s interest in this attraction, organizers decided to cancel it. Around noon drawing competitions were held by Q-nik. Following programme attractions were organized the same day after dinner break:

Evening „Furry art Experts” contest was replaced with documentary movie about zone in Chernobyl. In the Thursday evening there was farewell campfire organized for all attendees. Also, official organizers farewell and thanks were made during the campfire. Last official programme attraction was karaoke contest, which happened after the farewell. On Saturday morning last, this time unofficial farewell was made and the convention ended.

As a part of main program and main theme, there were additional attractions created and happened parallel to general program. All attendees were split into two fractions and were given an opportunity to complete several quests, and by doing so, compete as well with others. Also, each attendee was assigned to specific role for the fraction (one of five – soldier, medic, engineer, spy, and leader).

Attendees was able to compete total number of 20 quests designed especially for story line and published on one of two bounty boards at the convention place.

For each attraction, cottage that was participating in received a score (in a form of scale the bullet). Same happened if a quest was completed or a person won a contest. Having sufficient amount of points cottage was able to unlock and enter the computer terminal containing localization of GECK (Garden of Eden Creation KIT).

Once a cottage received lost GECK blueprint, it won the whole cottages competition.
In 2012 winning cottage (as per plot, bunker) was cottage number 112. As a reward, all residents received mascots.
Besides quests, attendees had prepared post-apocalyptic costumes and also stylized post-apocalyptic flags (one per cottage).

Attendees, as a part of their participation, received following materials and gifts:

The guests of honor:

Convention was attended by total number of 82 furries from all different parts of Poland (including three organizers and one guest from abroad). As part of the convention, couple of guest arrived to the venue for a single day. Total number of attendees and guests reached approximately 85 furries.

In 2012 Futerkon convention was organized by three people considered as an organizers-team:

For 2012 convention, following furries were helping as volunteers:

Following furries were helping in programme realization, being responsible for smaller program attractions: