An example of Furventure Games on browser.

Furventure Games began developing games at the end of 2018, under the name InterFurCreations. After a Telegram poll in March 2019[1], the admins changed the name to Furventure Games, possibly to better reflect the adventure aspect many of their stories take.

An example of the games on Discord.

The games are playable on Telegram, Discord and their website, and primarily use buttons or commands to select paths to progress the story-lines, many of which lead to sexual content or encounters. Over the years the creators have written games with differing progression formats (eg. open-world, RPG style). The games vary in size, with some games reaching hundreds to thousands of playable actions and hundreds of thousands of written words. 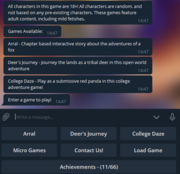 An example of the games on Telegram.

The games are all hosted via server and to connect (depending on the platform you play on), on Telegram you need to either message a bot called @FurryAdventureBot or join via link[2]. On Discord you can only gain access by a link to the bot named Furry Text Adventure bot[3]. In the instance of playing on the website [4], you must create a username in order to access the games and to save your data.

Whilst the Furventure Games announcement channels inform on new releases and important information, in-depth updates and changes are only available on the Furventure Games Patreon [5] from the first tier upwards. These updates feature behind the scenes in the creation of the games and the software involved. The games are as of June 2021 created using the open source diagram.net. The software for hosting the games on Telegram, Discord and a web app was made available on GitHub [6] on July 2020.

As of May 2021 the servers are up[7] and the development of games appears to be ongoing with a promised update to the game Deer's Journey, said to be around the corner, according to the Furventure Games Patreon only updates. Deer's Journey is one of several major games featured, with Arral and College Days being the next largest respectively.

The games featured on the website are split into larger titles and Micro games, which link to a separate table of contents for smaller works. The main games shared on all 3 platforms are:

The two appear to interact with fans on Itch.io and Twitter, answering questions and giving updates on their announcement platforms, be that Twitter, Telegram or Discord. They have posted in the past on visiting the Swedish furry convention NFC, with a picture of one of the banners from 2019[8].