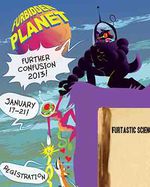 Further Confusion 2013 was the 15th annual Further Confusion furry convention and was held from January 17 - 21, 2013, at the San Jose Convention Center in San Jose, California. The theme was The Furbidden Planet! - A Retro Sci-Fi Adventure![1]

For Further Confusion 2013, the following signature events were held again:

Panels at this Further Confusion included: Transhumanism and Disability by Elizabeth Synclair.[4]