Further Confusion 2006 was a furry convention, the eighth annual Further Confusion. It was held from January 19 to 23 at the San Jose Doubletree in San Jose, California. 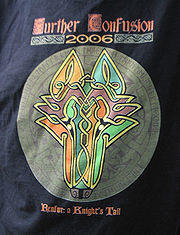 The charity auction benefited Wildlife Companions and the Comic Book Legal Defense Fund. The total amount donated from the convention to these two charities for FC2006 was $15,000.

208 fursuiters participated in the fursuit parade. 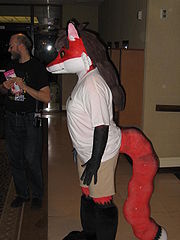 Lorianna, a Second Life-based vixen fursuit. One of the many costumes seen in the halls at Further Confusion 2006

As well as the continuing activities such as Gaming and the Creators' Lounge, there were several tracks, each with events and panels. The tracks were: Art, Business, Filking, Fursuiting, Puppetry, Tech, Science, Species, Social, Writing.

There were six, colored con badge designs, by Angel Blaze, Daniel Keller, Dodge!, Kat Vixen, Sidian, and Yippee Coyote. The badge designs are reproduced in color in the conbook. 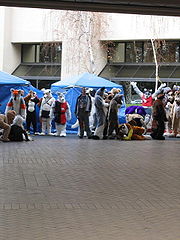 In regards to fiction, the story "Squirrel Errant" by Michael H. Payne is included, in addition to an excerpt from Volle by Kyell Gold.

As well, some pages have heraldic devices as decorative elements; these are based on depictions and descriptions in the 1909 work A Complete Guide to Heraldry by A. C. Fox-Davies.