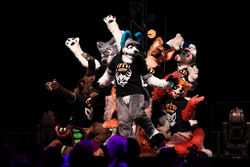 Furternity is a fursuit dance crew started by Atsu Fawx in 2013.

They were the Veteran winners at Midwest FurFest 2013 Fursuit dance competition.[2] They were also the winners of the group Fursuit Dance Competition at Furry Weekend Atlanta 2014[3] , Anthrocon 2014 and Midwest Furfest 2015.