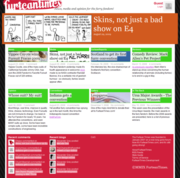 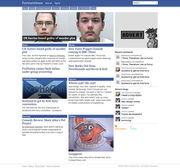 FurteanTimes.com (formerly The Furtean Times) was a furry-centric news authoring website founded by Alexander Grey in January 2007. It was initially released as a periodical fanzine before converting to a rolling news type website. It differed from websites like furryne.ws in the sense that it focuses on creating original content as opposed to syndicating content from elsewhere.

FurteanTimes.com showed particular attention to not only news - but also opinion columns, artist promotion and "just for fun" content. It also focused on freedom of expression, rarely censoring controversial content, but maintaining a strict PG-13 rating across all sections of the website.

The site closed in November 2010, however its content was preserved at Flayrah.[1]

The formation of The Furtean Times as a fanzine was started on the InflatioNation forums in early 2007, where Grey revealed an interest to start an internet-based magazine for the furry fandom, having previous experience in putting together similar publications in the past. With this, Diesel Leon applied for a role as Staff Writer but was offered the then-vacant position of Deputy Editor by Grey. The name, as suggested by Diesel, was a parody of The Fortean Times. This was emphasized by Issue 2's tagline: A world of strange furnomena; a parody of the Fortean Times' A world of strange phenomena.

After complaints that the first edition was simply a pile of images on a page (making it very hard to use) and the second edition already partially in this format, a new stance was approached - putting content and ease of use ahead of design. However as time has passed then the concepts of design have crawled back into the fanzine, with each edition having an individual look and feel to it, usually matching that issue's theme.

In November 2009, FurteanTimes.com witnessed the highest level of traffic and activity in the website's history, following an interview with editor Ian Wolf in the BBC News article Who are the furries?

FurteanTimes.com offers other services along with the main website, some which serve little relevance to the main site, while others are closely integrated with news sections. All spin-off services require a FurteanTimes.com account in order to be used.

avBin was an avatar hosting service, supporting GIF, PNG and JPG filetypes of up to 100x100 pixels. When four or more avatars had been uploaded, users could randomize avatars, causing different avatars to be displayed via the same URL. avBin ceased operating following site downtime in September 2010.

Furcast was an audio and video podcasting service for the furry fandom. Unlike the FurteanTimes.com parent site, Furcast did not require podcasts to be of a furry-relevant nature, nor did it do any vetting to ensure that members are furries. Furcast Beta launched on April 6, 2009. It closed a few months later, following lack of interest and crippling backend problems. (It is not to be confused with FurCast the live talk show about the furry fandom which is still ongoing.)