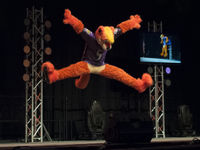 The Fursuit Dance Competition is an event in which furries in fursuits perform dances in any of several permitted dance styles—such as acro, ballet, jazz, hip-hop, lyrical, modern, and tap—before a common group of judges. Typically performers will get between one and a half to two minutes to "show off" their dance skill while wearing a fursuit to win 1st, 2nd, or 3rd place. Fursuit dance competitions can either be performed solo, or in groups.