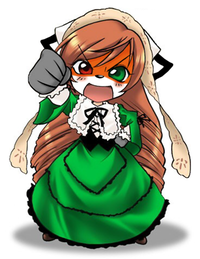 Furseiseki, also know as Furry Desu, is a fox version of Suiseiseki, a character from the anime Rozen Maiden.

She first appeared on 4chan, posted anonymously as a quick doodle by furry artist Taski.[1][2] She has since been drawn by several artists and made her way to various imageboards where she is usually posted to antagonize anti-furry elements.

Aside from the "chan" boards, she now has a cult following in the furry community.[3]