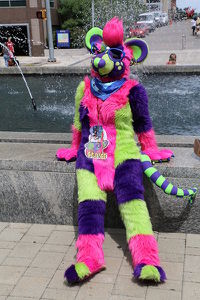 Furryformer, also known as Furryf0rm3r, or Rabiezcore is a furry artist, fursuiter and fursuit-maker who lives in in the USA. She is known publicly for her Elder Scrolls fan art, and homosexual Star Wars original characters. Active in the furry community since at least 2014, Furryformer has been attending furry conventions since adolescence, calling them 'bathroom cons' after the practice of hotboxing a fursuit in the hotel restrooms. Furryformer maintains a small cult following on Instagram, Fur Affinity, and Discord, and occasionally opens commissions for fursuits and art.

Furryformer's former fursona was a radioactive rat named Grunge. On June 2014, the fursuit of this character was retired. In 2019, Furryformer created a new fursona named Saffron. Saffron is a red panda and wolverine mix, and has been described as an immature, self indulgent, and affectionate troublemaker by her creator.[1] Furryformer created a fursuit for Saffron soon after in 2020.