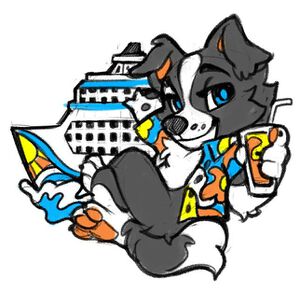 The Furry Cruise is an event involving furries booking as a group on a cruise ship. It takes place on an annual basis, and started in 2005. Many take fursuits and entertain themselves and the other cruise members. It is the only furry conventions/meet where most (if not all) of the activities take place in a sailing ship rather than on land (the other being the former RBW, partially succeeded by the LondonFurs Summer Boat Party).

The 1st Furry Cruise, December 5-10, 2005, set sail out of Miami, Florida via Royal Caribbean Cruise Lines' Majesty of the Seas. 37 furs took part in the tour, planned by LatinVixen, which stopped at Nassau, in The Bahamas; and Key West, Florida. A scheduled visit to Coco Cay, Royal Caribbean's private paradise on Little Stirrup Cay (also in The Bahamas), was canceled due to rough swells at the time of arrival.

The 3rd Furry Cruise set for December 2-9, 2007, with the destination to the Mexican Riviera in mind, was canceled due to a lack of commitment. A discussion was opened to draft an alternative itinerary, but was not ultimately successful.[2]

The next years Furry cruise, dubbed the 3rd Furry Cruise (ignoring last years cancellation) was held on December 1-5, 2008 and sailed to the Bahamas.[3] The ship, Monarch of the Seas, departed from Port Canaveral, Florida and included stops at Little Stirrup Cay ("Coco Cay") and Nassau. 15 people attended.

The 4th Furry Cruise was held on December 5-10, 2009, with 14 attendees. Cruisers traveled on Royal Caribbean's Navigator of the Seas out of Miami on a five-night cruise with stops at Labadee, Haiti, and Ocho Rios, Jamaica.[4]

The 6th Furry Cruise was held December 5-10, 2011, with 24 attendees on Royal Caribbean's Liberty of the Seas, sailing from Fort Lauderdale, Florida.

The 7th Furry Cruise was held December 2-7, 2012, on Royal Caribbean's Freedom of the Seas, departing from Port Canaveral, Florida. There were 27 attendees.[5]

The 9th Furry Cruise was for November 9-16, 2014,[8] aboard the Norwegian Cruise Line's Norwegian Sun.[9] Departing Tampa, Florida, the cruise will visit Roatan, Honduras; Belize City, Belize; and Costa Maya and Cozumel, Mexico, before returning to Tampa.[9] A total of 17 were in the group.

The 14th Furry Cruise is scheduled for November 3-10, 2019,[19] on the Norwegian Escape, heading from New York to the Royal Navy Dockyard in Bermuda.