Furry Summer Mexico (FSM) was a furry convention in Mexico. Founded in 2014, it took place at the Centro de Espectaculos Plaza in Cuauhtémoc, Mexico City from 2015 until 2017, when it moved to Ponciano Arriaga #20.

Organizers include YXM (Wayexem Black Tiger) and Charley Wong, and the event is staffed in part by the CMFur community.

This extended furmeet gathered around 50 people judging by group photos, including at least 12 fursuiters. It was organized on DFur's Facebook page (which had previously organized (Halloween DFur) and involved various regional groups were: Vidafur, GTFur, Enfurry, Urban Clawz, Bicifurros and Tonalli Furs.

There was no fixed location for the event; rather, several places were visited over August 1-3, 2014:

Art was created for the event by Reigt Dreve, Darius and Mixtli Izel based on YCHs from a raffle of those who had pre-registered for the event. This would be developed in later editions so that everyone who paid to enter at an "artistic" sponsor level or higher would be entered into the raffle. Packages ranged from 50-350 pesos depending on whether ice-skating, a choice of one of the five T-shirt designs, or extra sponsorship was desired. Pictures and photos are available in the Spanish-language page about the event.

Furry Summer 2015 "Steampunk Pirates" took place 17-19 July.[1] It is unclear whether there were any pirates involved, let alone steampunk. However, there were far more people, overwhelming the ability of the three staff members to manage them. Some got lost, being split up into separate groups. There was no backup plan in the event of rain (which predictably happened), and YXM reported that the backpack with the camera and branded tarpaulins for the group photo was stolen. Many were disappointed and there was a determination to recruit more staff and handle things better next year.

This year's event appears to have been covered by Vice News Mexico and the Espectáculos TV program. The theme was Club de Verano ("Summer Club") and it took place July 29-30.[3]

A "supermeet" was held on May 20 to publicise the event. 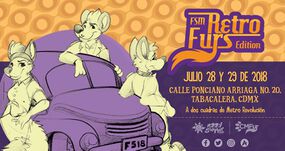 In 2018 the convention's theme was "Retro Furs". The event took place over July 27-29. Programming included:

Visits (designed particularly for those from out of town) to the Monumento a la Revolución, walking along the Paseo de la Reforma and a visit to the Angel of Independence followed by a group shot.

The at-door cost was 350 pesos for both main days, or 200 pesos for one day, and a 80 peso surcharge for Friday unless you had certain packages, while pre-registration was 25% less and package deals including badges, t-shirts, posters, sketchbooks, commemorative Thermos flasks, and personalized jackets were available from 500 to 1500 pesos.

The 2019 theme was announced as "Dungeons & Furries" in December 2018. However, drama revealed in January 2019 swirling around a laptop, bike payments, and a PayPal dispute, resulting in a failure to place a deposit on the convention venue, which finally caused the postponing of the event in 2020.

After the "financial problems" the convention was postponed initially to July 25 and 26, however the COVID19 pandemic forced the staff postponed again the event from July 23 to 25, 2021, with already 3 consecutive cancellations , and in general,for the loss of support from the Mexican community due the last problems of organization, the event was definitive cancelled [4].