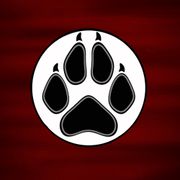 The group was founded in 2007, beginning exclusively on Second Life,[1] with their official stated goal being to:

Furry Raiders was one of several groups to block-book a cinema for a furry-centric screening of the movie Zootopia. Taking place on March 5, 2016,[5] at a branch[clarify] of the Alamo Drafthouse Cinema, the event saw 107 attendees, including 17 or 18 fursuiters.[6]

On July 17, 2022, Furry Raiders announced staff help for the first iteration of the anthro convention, Free Fur All.[7]

The people involved in the running of the Furry Raiders are:

The Furry Raiders and Nationalsozialismus' imagery 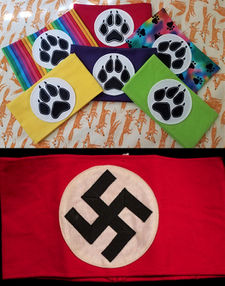 Official Furry Raiders armband (top, red) based on a design by the Die Deutsch Furmacht or Furzi armband on Second Life, which was based on the commonly used WWII NSPAD (or Nazi) armband design (bottom)

For more details on this topic, see Foxler Nightfire#Association with fascist imagery, Nazism, the alt-right, and the Furry Raiders.

Furry Raiders has drawn some criticism due to the similarity of their logo (often worn as armbands) to the swastika symbol of Nazi Germany.[9] The logo, as shown above, is a paw print, frequently used by furries to represent the fandom.

The group was banned from wearing the armbands at Foxtrot, a fursuit-friendly dance night at a Bar in Denver, Colorado.[10] One of the founders, Foxler Nightfire, is banned from attending Fox Trot for assaulting another attendee.[citation needed] Though Foxler claims said assault amounted to nothing more than bumping into someone on his way out the door.[citation needed]

At Biggest Little Fur Con 2017, attendees were asked not to wear the red armbands,[citation needed] but were allowed to wear armbands with the logo in different colors.[citation needed]

In April 2016, a controversy was generated when it became known that Furry Raiders had block-booked 25% of the hotel rooms available at the Crowne Plaza for Rocky Mountain Fur Con 2016,[11][12][13] before the room block officially opened.[14]

After being contacted by RMFC staff, Furry Raiders declined to drop their reservations at the Crowne Plaza.[13] The convention staff subsequently announced:

On April 14, Furry Raiders announced that they had "released 25 rooms in total after discussion with @RMFC_Denver" and we're going to "accommodate our guests much more efficiently than before".[15]

On April 14 RMFC issued a correction to the previous state via Facebook & Google+.

As of April 12, 2017, RMFC 2017 was canceled, as reported by TV Channel 7 News in Denver. Alleged suggestions of why this happened included a tweet by a furry raider[who?] that a weapon would be brought to RMFC to deal with Deo Vacuus, who threatened to punch Nazis at the con.[citation needed]

This was reported to the hotel/police,[citation needed] which increased the security fee for the convention, well past operational budget.

In June 2017, members of the Raiders were asked to leave the Colorado Furries, a furry Telegram group, due to "community outcry as well as relatively recent events".[16][clarify]

On May 15, 2018, almost all of the Furry Raiders personal accounts on the online furry art site, Fur Affinity, were banned for presumed violations of the site's Code of Conduct, Section 2.7 ("Do not identify with or promote real hate or terrorist organizations and their ideologies").[17]