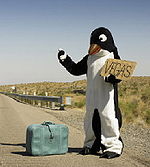 Furry Kama Sutra is a video project by photographer Michael Cogliantry. The project consists of three short video clips, each featuring various fursuited characters interviewed in the style of a slice-of-life documentary. The title alludes to the fact that each episode features a brief sex scene.

Released in Winter, 2006, Furry Kama Sutra was Cogliantry's first video project. It was shot in and around Las Vegas (including 10 hotels) over 4 days, and utilized some twenty fursuits (though most did not appear in the final clips).

Furry Kama Sutra received an Honorable Mention in the IPA 2006 Photographer of the Year Competition[1], and was released as a collectible fur-covered book[2]/dvd set.

In 2008, from May 2 to June 1, there is a Furry Kama Sutra art show at Nemo Design in Portland, Oregon, USA.[3] A furry attend the launch party and estimated there were 100 attendees.[4]

A trailer for the series also exists, featuring the legend:

The trailer includes shots from the three episodes that were not used in the final cuts, as well as footage of the characters that were eventually dropped.