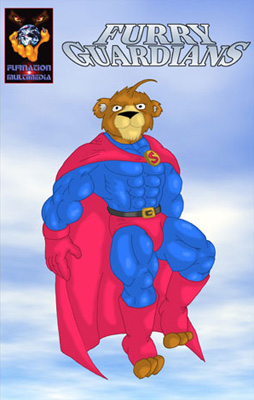 The cover of Furry Guardians #1.

Furry Guardians is an ongoing comics series published by Furplanet and created by Cyberklaw. It is an action adventure series following the adventures of an assortment of furry superheroes.

Furry Guardians was among the finalist nominees in the 2007 Ursa Major Awards in the category of Best Comic Book.

Furry Guardians was originally created by Cyberklaw in late October 2005, and it represented his first foray into the world of comics. He produced the 22 pages of the first issue in just two weeks, and on November 2nd 2005 he posted the completed first issue on his website.

After receiving generally positive feedback on the comic, Cyberklaw proceeded with work on further issues. The 22 pages of the second issue were posted on his site on January 17th, 2006. The third issue, which ran to a slightly longer 24 pages, went up on Cyberklaw's web site on April 6th, 2006.

However, the fourth issue ran into delays, and before work on it could go ahead things changed dramatically. After submitting a 10-page comic story for Furnation's anthology magazine, Cyberklaw was presented with the opportunity to have Furry Guardians published as an actual printed comic. At this point, Cyberklaw removed the three existing issues from his web site.

For the published edition of Furry Guardians, Cyberklaw decided to rescan and recolour the original pages at a higher resolution, in order to produce a higher quality product. Additionally, with the length of the average Furnation comic being 32 pages, Cyberklaw decided to produce brand new back up stories for the three already written and drawn issues to fill the extra pages and to provide extra value. While working on these back-up stories, Cyberklaw came to like the idea and now intends for every issue to consist of a main story and a back-up story.

Furry Guardians was originally intended to be published as a greyscale comic with a colour cover. But when Furnation started making moves to producing full colour comics, Cyberklaw opted to delay the start of the series until Furnation was able to do this, in order that it could be in full colour from the very start.

Furry Guardians #3 was released in November 2007. As of this issue, the series becomes a greyscale comic. Due to the rising cost of colour printing at Furnation, to continue in full-colour would have meant a rise in the selling price, which Cyberklaw thought might make the series prohibitively expensive for people to buy.

After a significant delay, Furry Guardians #4 was finally released in November 2008. With this issue, the series returned to being a full-colour comic.

Furry Guardians #5 was published in March 2009.

Cyberklaw is currently working on further issues of the comic.

Furry Guardians issues published so far. Each issue contains a main story and a shorter back-up story. Descriptions are from the Furry Guardians web site.

'The Bear of Steel'

The powerful Superfur makes his debut as his world's very first superhero. His first day is quite eventful, including a battle against a mysterious rampaging cyborg wolf. But what long term effects will the arrival of a superhero have on the world?

After a few days as a superhero, Superfur thinks he's starting to get the hang of a superheroic life, but an encounter with the villainous Coldfire gives him pause for thought.

The enigmatic Shadow Knight has tracked down Superfur, but what does he want to talk with the bear of steel about? And will Superfur be interested?

While studying a mysterious ancient mask, the life of Professor Byron Furst is transformed when he discovers it's secret...

'Life in the Fastlane'

A new hero, the super-speeding badger Fastlane, makes his debut, battling bad guys and encountering his fellow heroes. But just how heroic are his motives?

The ancient warrior Kryn finds himself facing an old enemy.

The heroes must act as a team for the first time when they come together to battle the rampaging powerhouse known as Titan. But can a way be found to defeat this seemingly unstoppable foe?

While attempting to come to terms with the new modern world in which he finds himself, ancient warrior Kryn battles an old enemy.