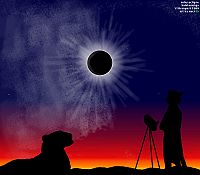 Impression of the 1999 eclipse

Furry Eclipse is the name of a holiday trip by furries to watch a solar eclipse.

From 10 to 12 August 1999, Seras and unci travelled from Germany to Lake Balaton in Hungary to see the total solar eclipse.

In March/April 2006, Angus from Germany, Jamango and Xkun from the Czech Republic, and unci from Austria travelled to Turkey to see the solar eclipse on 29 March 2006. The trip started in Antalya where the four participants met on 25 March (Angus was there a day before), and visited nearby attractions such as the ancient cities Termessos, Phaselis and Olympos. They moved to Side on the day of the eclipse, watching it in perfectly clear weather from a place on the old town wall. The Czech participants had to leave on the same day, the other two extended their trip by a few days, returning to Antalya on 31 March via Aspendos.

The next total solar eclipse took place on 1 August 2008; the totality zone crossed Siberia into the Altay region and China.

Furry Eclipse 3 took place in the Altay mountains in Russia. Starting from Barnaul, nine participants (including five furries) travelled by car into the mountains where they did a six-day hike with their own tents through snow leopard country (without sighting any snow leopards though). After this, some of the participants travelled back via Almaty, Astana, Moscow, Kiev and Slovakia to Austria. The viewing conditions for the eclipse were great, just as during the first two meetings.

The total solar eclipse of 22 July 2009 didn't result in a furry gathering; unci was in Shanghai, China to experience it during heavy rainfall under an overcast sky together with millions of others who came there from all over the world.

A total solar eclipse will cross the United States on 2017 august 21, it is not yet decided where the furmeet to watch it will be.