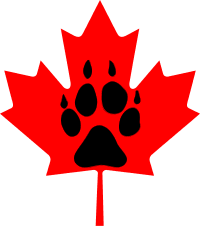 A maple leaf with a paw on it, the unofficial symbol of Furry Canada Day

Furry Canada Day is an annual furry meet that takes place in Ottawa, Ontario, Canada on Canada Day (July 1st.) Furry Canada Day has been running since 2008 and has been growing steadily since. Now into its third year, the expected turn out is over 100 people including some fursuiters.

Furry Canada Day was officially started on July 1st, 2008 as a very small, friendly meet with about 3 people. Zets Raccoon was the only fursuiter attending this year. The second annual Furry Canada Day meet took place on Canada Day, 2009 and had about 75 people over the course of the day.

The usual itinerary for the Furry Canada Day meet consists of a rendezvous at the Supreme Court of Canada, followed by a short walk through downtown Ottawa to the National Gallery, and later watching fireworks at the Museum of Civilization across the border in Quebec.

Canada Day usually attracts over 100,000 people to the downtown area, so there is a huge audience for any potential fursuiters. Walking from the Supreme Court to the Galleries usually takes about 15 minutes, but because of the number of people can take up to an hour.