From WikiFur, the furry encyclopedia.
(Redirected from Furries versus Klingons Bowling)
Jump to: navigation, search 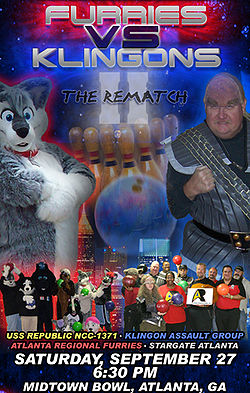 The official poster for the Furries Vs. Klingons II Bowling Event.

Furries Vs. Klingons was a bowl off between a group of Klingons and the local Atlanta Furries, held on September 29, 2007 at the Midtown Bowling Alley in Atlanta, Georgia.

The event caused a little hype on the Internet, creating enough interest to bring in nearly 200 people to watch and play in the event. A poster promoting it was posted on several LiveJournal communities. The event was picked up on Boing Boing and news quickly spread to Fark, Something Awful, G4, Slashdot, and Digg.

Within a week, the event had received over 4 million page views on the various web sites and Google was tracking over 200,000 individual web sites referencing the bowling event. Also present were a few members of the media, including Fark TV and G4TV. The Klingons ended up taking home the trophy.

The event reoccurred a year later on September 27, 2008, though the rematch did not get as much attention. The organization set up by the Klingons side made it very tough to find a clear winner, but everyone had a good time anyway. At the end of the event it was decided that both the Furries and the Klingons would work together setting up the event for next year, and was expected to occur around the same time.

Pics from the events[edit]

The event taking place was only one frame in length. The score for the first event was: