Furries Off Road is a small, furry run, Off Roading (four wheel driving) group based in Queensland, Australia. The group consists of roughly six furs (four of which are owners of four wheel drive vehicles)

Furries Off Road is a non-profit community group. There is no cost to join the club, however club members are responsible for paying for their own fuel, ferry costs, camping site fees and vehicle access permits. 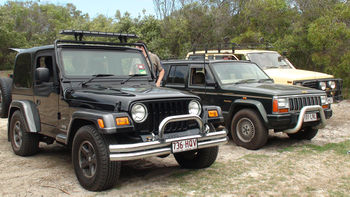 The vehicles that participated in the first Furries Off Road meet held on Bribie Island in Queensland, Australia on the 13th of February 2010. (Photo courtesy of RecovFurry - Photographer: Kidsune)

The Furries Off Road group was established shortly after an unofficial 'Off Roading' style fur meet taking place on Bribie Island was announced on the Furstralia Forums by RecovFurry's founding member, Jet Dingo[1].

Although the original 'idea' behind the fur meet was to encourage new volunteers to join the RecovFurry service, shortly after the meet had concluded, attendees openly expressed their desire to attend ongoing fur meet's centered around Off Roading if they could be successfully organized and executed.

On the 16th of February 2010, following an online discussion, Jet Dingo agreed to become an organizer for future Off Road style fur meet's and began hosting a specialized forum on the RecovFurry website to assist in the planning process of any outings.

RecovFurry was designated the official sponsor of the group. Following this action, it was decided that in order to easily differentiate between RecovFurry and the unrelated fur meet's, the group should be named differently, as not all attendees preformed recovery work. The Furries Off Road logo was then established, and the group was named officially.

Furries Off Road conducts semi-regular meets that consist of day-long, off-road treks to various locations around Brisbane. Members vehicles will tackle almost every type of terrain, ranging from easy going beach sand running, all the way up to difficult mountain climbs. The aim of the club is to encourage its members to take their vehicles to the limit of their capabilities in a safe environment.

A number of the vehicles involved with the club are not heavily modified, however they have still proven to be able to handle the terrain time and time again. The club states that it is a requirement that all members vehicles are fitted with 'four wheel drive' and have safe recovery points to allow the vehicle to be towed out of trouble if disabled. 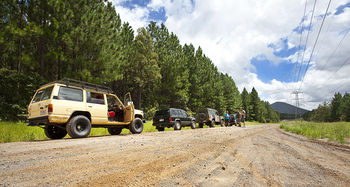 The vehicles that participated in the Caboolture to Woodford Trails trek held in Queensland, Australia on the 20th of February 2010. (Photo courtesy of Furries Off Road - Photographer: Leon Panther)

Before the club goes out on a meet, detailed information is published on their website's forum, generally a week or two before the scheduled trek date. This information includes elements such as trail length and quality, estimated travel time, weather forecasts, vehicle equipment and permit prerequisites, and a proposed meeting spot. Member attendance is posted on the forum for both a permanent record and to allow the trek leader a indication of group size.

A fur who attends a Furries Off Road meet is considered a member, provided they own their own vehicle or have access to one. It is not unusual for club members to bring additional furs along as guests.

Each trek is lead by a 'Team Leader' who is responsible for the groups operations for that meet. The Team Leader plans the route the group will take, ensures all track permit, trail and environmental impact regulations are met, calculates fuel consumption for the group as a whole and generally oversees everyone having fun safely for the duration of the meet. The Team Leader for each trek is generally the same person who suggests the location or announces the meet. Club member's usually have attended a few meets before putting themselves forward to become a team leader.

Trail spotters are used in every club meet, their job is to inspect the trail ahead and radio back to the group trail information. This information is usually used to determine which vehicle should proceed first. Although there is no official prerequisites to become a spotter, due to the value of the vehicles involved, usually only furs who are considered highly responsible are asked to become club trail spotters.

This sponsorship gives all of the club's members access to larger than normal discounts for their vehicle lighting.