Furnal Equinox 2011, the second annual Furnal Equinox, was held on March 11-13, 2011 at the Doubletree by Hilton Toronto Airport in Toronto, Ontario, Canada. The theme of the convention was "Wild Magic". [1]

Over 450 people attended the convention over the three days (a 36% increase from 2010), including 110 participants in the Fursuit Parade.[2]

Furnal Equinox's charity auction raised a total of $4,000 for the Mississauga Humane Society. One of the successfully auctioned items included a commission from ZEN which sold for $450.[3] 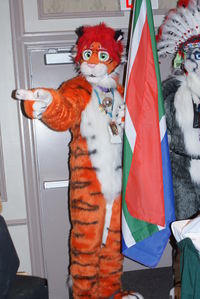 ZEN also celebrated his birthday at the convention on Sunday.

Preregistration opened to attendees on 3 August 2010 and concluded on 2 March 2011. Memberships cost $30 to $40 Canadian depending on the time of registration. Sponsorships for an additional $30 included a T-shirt.

Dealers' tables opened up shortly after registration and were completely reserved as of November 2010, though they reopened after an expansion in late January. 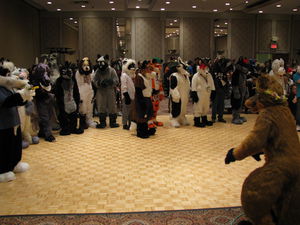 The Furry Games at Furnal Equinox

Furnal Equinox expanded to three days of programming for 2011. The convention originally planned to remain in the Mississauga wing from the previous year, but in late January an expansion to the International wing was announced, almost tripling the available floor space and allowing space to be allocated to a Dealers Den in one room (the original plan was to split it among two rooms). Space was also set aside for a massive Zoo and an Artists Alley.[4]

The Wolf's Den hospitality suite was introduced, offering soft drinks and snacks in an eleventh-floor suite for those registering as sponsors. The Wolf's Den was also used for receptions by fellow Canadian conventions Camp Feral! and What The Fur as well as a meet-and-greet for Ontario Furs.[5]