Furluminati Fanzine (sometimes referred to as the SveaFur Fanzine), is an annual independently produced comic book by the Swedish furry community SveaFur. It features comics written and illustrated by various artists of the community and is edited by Frenzee.

There had been talks and interest for a Swedish furry fanzine on SveaFur for a long time before the original realization of the Furluminati fanzine[1], at least two such efforts had been talked about but without any fruition. The fanzine was finally organized after a discussion about the absence of popular Swedish comic publications like Pyton and Pox,[2] which served as an inspiration to create something new with the same spirit.

The general idea of the fanzine is to act as a representation of all the various aspects of furry culture and be accessible for both furries and people outside the fandom. This is accomplished by giving all the different artists free creative control as long as the final result can be linked to furries, and while the covers suggest a specific theme for the content, there is no overall theme apart from furry fandom. The only recurring elements between the two issues are the artists, and in some cases their comics, as some choose to create sequels to their stories in the first issue.

An official language has never been decided, most comics are in Swedish, while some are in English, a few are intentionally void of dialogue. All comics are in black and white because of cost-related issues. 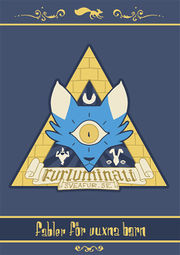 Cover of the first issue.

Work on the first issue was started in October 2012 with the deadline of March 2013.[3] The final product was sold at NordicFuzzCon 2013 and Stockholms internationella seriefestival. The cover was an illuminati inspired design with a SveaFur twist, which was originally designed as an embroidered patch sold to members of the forum.[4] The design features the forums mascot, the cyclops fox Ragnar, as the all-seeing eye inside a pyramid structure, at his sides are the joke deities Spökguden (The Ghost God) and Tymor, which are popular memetic characters on SveaFur.[clarify] At the top is a sausage, which is an in-joke on the forum for greeting new members, "välkommen" (Welcome) sounds similar to "varmkorven" (Hotdog).

At NordicFuzzCon 2014, the last remaining issue was sold during the charity auction for 1000 Swedish Krona (155.00 US Dollars), with 95% of the profits going to charity. This fanzine was signed by all attending artists (Fröken Keke, AndyMcNub, Frenzee and 13), and is the only one which has been signed by that many of the artists.

(A "foreword" by Vlad the Impala is featured on the back of the fanzine.) 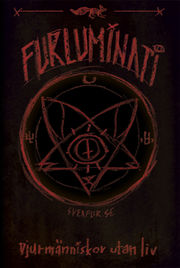 Cover of the second issue.

Talks of a second issue started almost immediately after the first issue was completed. Official work started in August 2013 with a deadline of February 2014[5]. This fanzine was sold at NordicFuzzCon 2014 and Stockholms internationella seriefestival.

The cover is inspired by Satanism and features a Wicca pentagram in the likeness of Ragnar, again with simple representations of Spökguden, Tymor and a sausage surrounding him. Regardless of this, the fanzine still bears its illuminati based title.