Furloween is an annual Halloween party held in Orlando, Florida. The party is run by Mach Stormrunner, and has been held every year since 1999.

Furloween has the distinction of being Florida's first major furry meet, predating Furry Spring Break by two years, Megaplex by three and both Elliott's Spring Gathering and Elliott's Fall Festival by seven years.

The mascot of Furloween is Ozzy Bat. 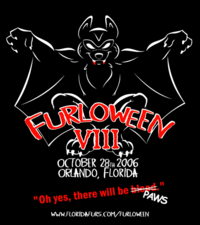 Ad for Furloween 2006 by Herbie Bearclaw.

Although Furloween usually has a limited number of vendors, the festivities are centered around a fully catered banquet dinner and dance. A cash bar is also available to guests over 21. Unlike regular conventions, it only takes place for one night, typically on the Saturday before Halloween.

There is a picnic [1] held at Blanchard Park the following day for the purpose of unwinding from the meet.

There are also a number of events scheduled outside of the actual party, but most of these are outside of Mach's control. The party attracts furry fans from all over Florida, and from outside the state as well.