Furlando, originally intended to be called Zerocon, was an hoax furry convention[1] purportedly slated for July 27-29, 2007 in Orlando, Florida, U.S.A.

It was "cancelled" in September 2007 by BaronVonYiffington, the (at the time, 13 year old) con's chairman and originator of the hoax, due to "economic reasons", but the bid to hosted would be relaunched on the same weekend in 2009 or 2010 when the chairman received the funds needed to procure the rooms at the (unnamed) hotel.

The reason behind the practical joke[edit] 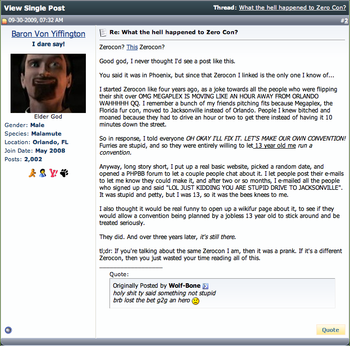 Its convention staff would have consisted of:

Events planned for it would have included: