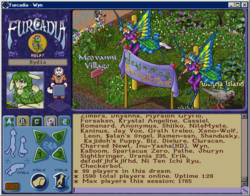 The Furcadia Client runs on Windows 95 through Vista. It is organized into four main areas:

An officially supported Macintosh client has often been requested, but in the past has been considered a "lower development priority" when compared to other features and capabilities. Ghost Tiger has developed and maintains mFurc, a native client for the Macintosh users that provides most of the capabilities of the Windows version. It also includes several enhanced capabilities, including a buddy list, integration with Growl for notifications and whisper chat windows, much like those provided by iChats plus a contact list, and a selective notification feature called Totem. mFurc is Leopard (10.5) compatible and available as a Universal binary.

GNU/Linux users should find that The Furcadia Client installs and runs perfectly under wine versions greater than 0.9.17. and with CrossOver. New Macintosh systems that use Intel chips can run Furcadia via CrossOver, Parallels Desktop and/or Boot Camp (which allows Windows 95 to Vista OS to run natively.)

Many third-party applications have been written to complement and enhance the Furcadia Client. These applications include: